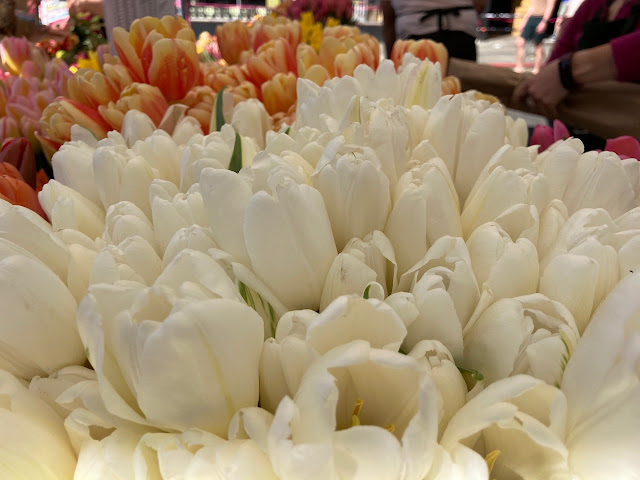 If you were to end Jane Austen's Sense and Sensibility at the conclusion of the second act, where John Willoughby has just informed Marianne Dashwood of his engagement to Miss Grey, and where Elinor Dashwood is certain that Edward Ferrars will marry Lucy Steele, and if you were to increase the frequency of sentences like this one

Elinor who had now been some time reflecting on the propriety or impropriety of speedily hazarding her narration, without feeling at all nearer decision than at first, heard this; and perceiving that as reflection did nothing, resolution must do all, soon found herself leading to the fact.

and spend a little more time dissecting the delicate minutia of Elinor and Marianne's internal worlds, then you might find yourself with something very like a Henry James novel.

at May 12, 2021 No comments:
Email ThisBlogThis!Share to TwitterShare to FacebookShare to Pinterest
Labels: art misunderstood, henry james, poetry misread, reading 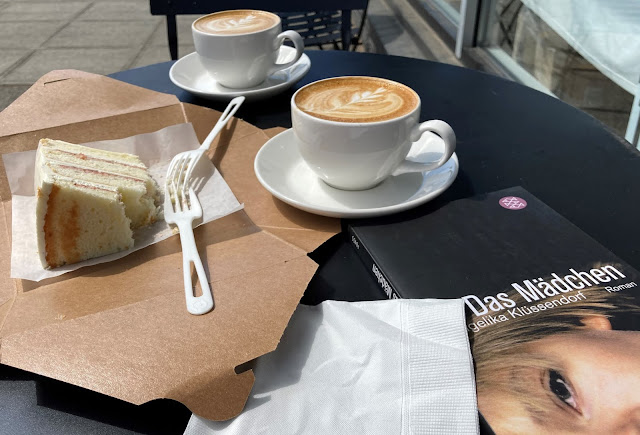 Meal en route. That's a slice of lemon rhubarb cake with buttercream frosting. I don't remember the name of the cafe. We stopped at so many of them. 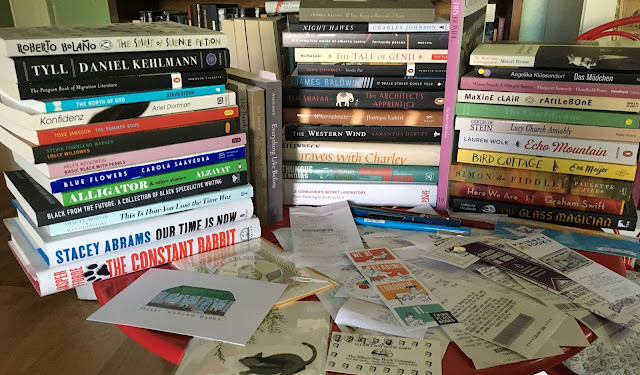 The spoils of war.

Yesterday, Mighty Reader and I visited a lot of book stores in Seattle, our final assault of the Seattle Independent Bookstore Day. I think we shopped at five places (a couple of our intended destinations were closed to observe the Sabbath), and we biked just under 30 miles in about six hours. I don't know how much time we spent actually shopping for books; most of the stores had posted rules about maximum occupancy during this pandemic, and also were limiting the time one could be in the store. I don't remember what I bought where, so I won't break things down that way for this post. Not that you care, anyway. I will tell you that Phinney Books has the best selection of fiction, with a nice mix of new and classic works, and a good number of contemporary works in translation. Nice to see Margaret Jull Costa getting a lot of work.

The other books pictured were chosen by Mighty Reader, whose tastes are much broader than mine. Mighty Reader also keeps track of details better than I do, and she informs me that in the last week, we have cycled a little over 79 miles to visit book stores. I'm glad we've had dry weather, even if it hasn't been so warm. Today, of course, it is raining.
at May 03, 2021 4 comments:
Email ThisBlogThis!Share to TwitterShare to FacebookShare to Pinterest
Labels: books books books and some books 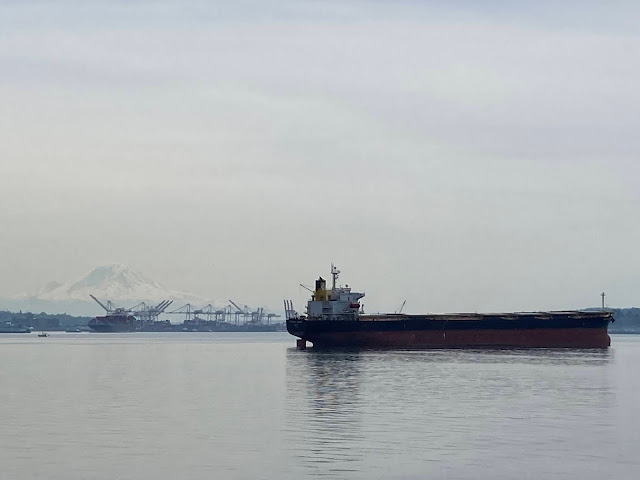 Mighty Reader and I have been celebrating the 2021 COVIDmania version of Seattle Independent Bookstore Day,  which this year is a ten-day event, so we are making a leisurely time of it. Yesterday we visited Magnolia's Bookstore where I picked up Charles Johnson's Night Hawks and Roberto Bolaño's The Spirit of Science Fiction.The first because I mistook, in the heat of the moment, Johnson for John Keene, author of the excellent collection Counternarratives. The second because I have never read any Bolaño and TSoSF was the only thing of his the store had on the shelf. Magnolia's Bookstore is right next to the Petit Pierre bakery, and of course we bought five or six pastries to bring home.

On Saturday we visited Paper Boat Booksellers, a local shop owned in part by Eric Judy, who you of course know as the original bassist and co-founder of the band Modest Mouse. Eric is a nice guy who loves bookstores, and now he's got one of his own. I picked up three books there: If You Kept a Record of Sins by Andrea Bajani (because I have enjoyed every novel I've read so far published by Archipelago Books), The Penguin Book of Migration Literature (because these Penguin collections are always mighty fine and I am interested in the literature of displacement), and Daniel Kehlmann's Tyll, a retelling of the story of Till Eulenspiegel, which I read in German as a teenager.

Traditionally, we visit ten or so bookstores in a single day, cycling madly around Seattle with well-timed stops for restorative pastries or pints. This year there's none of that, what with one thing or another. If it isn't raining tomorrow, we'll probably leap onto our bikes and visit a few more stores and further pump the local economy and perhaps pick up some more pastries.

at April 30, 2021 No comments:
Email ThisBlogThis!Share to TwitterShare to FacebookShare to Pinterest
Labels: books books books and some books

in fact, nothing at all 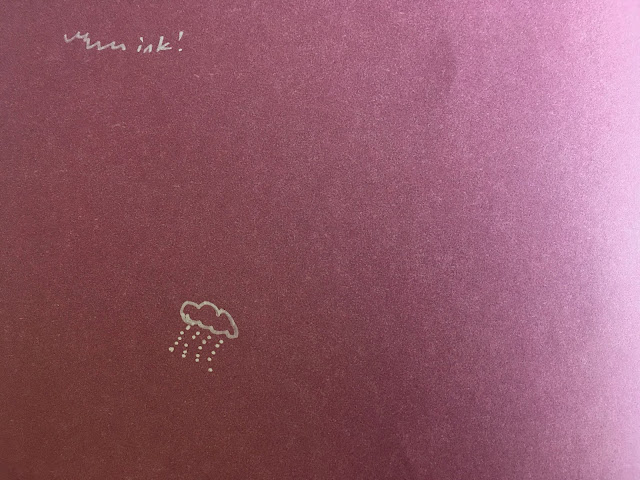 One thing that keeps striking me about Brookner's writing in Latecomers is how it reminds me of Nabokov. The resemblance seems pretty strong to me, but I've been having a devil of a time putting my finger on why. I can't necessarily point to anything specific in the novel, yet there must be something to set off my Vladimir Detector(tm), mustn't there be?

I made a little note to myself yesterday of "Nabokovian qualities in Brookner" and here's what I wrote down:

That is not much of a list, I grant you, and certainly nothing in it is particularly insightful. Perhaps some actual prose would help.

Toto, leaving Oxford with a poor degree and a large following, had given much thought to his future. The details were vague in his mind but the outline was bold: he simply knew that he would be prodigious. In an exemplary way--exemplary in the sense of accurate foreknowledge--he knew that he was born to be a prodigy, for the word had suggested itself to him when he was a young boy, fretting at the confines of his bourgeois home, 'Je suis en enfent prodigue,' he had said to himself; he was in his Baudelaire phase at the time and longed to have a stepfather whom he could hate, instead of Fibich who forgave him everything. The path he was to take was unclear to him, but he was convinced that it led to stardom. He idly contemplated notions of couture or modelling; however, acting was his metier, he felt, not the old fustian stuff of drama school and years spent in provincial repertory, but instant fame on the small screen, springing into a million homes, knocking the inhabitants flat with the sheer lustre of his personality. In the meantime, until the day of his discovery, he had little to do, for it was simply a question of waiting until somebody noticed him. That someone, he saw, would be a woman, one of the new hard-pressed breed, working frantically for a television company, but taken off guard and becalmed into wistfulness by his unusual good looks, his splendid body; he would present his profile to her, then turn full-face and look her brazenly in the eye, and the next thing he knew she would have secured him a part in her next production. Anything would do: he would accept a serial to begin with. But what he had in mind was one of those masterly fictional exposes of the condition of England, in which corrupt schoolboys prefigure the handsome damaged adults who habitually compete for eminence in the inflated world of espionage.

Does that not strike one as Nabokovian? "he was in his Baudelaire phase and longed to have a stepfather whom he could hate" is pretty good, as is "taken off guard and becalmed into wistfulness by his unusual good looks." The final sentence of the excerpt is especially good. How about this, then:

His college years were not particularly happy. To be sure, he enjoyed many of the things he found there--he was in fact quite overcome at first to see and smell and feel the country for which he had always longed. A real hansom cab took him from the station to his college: the vehicle, it seemed, had been waiting there especially for him, desperately holding out against extinction till that moment, and then gladly dying out to join side whiskers and the Large Copper. The slush of streets gleaming wet in the misty darkness with its promised counterpoint--a cup of strong tea and a generous fire--formed a harmony which somehow he knew by heart. The pure chimes of tower-clocks, now hanging over the town, now overlapping and echoing afar, in some odd, deeply familiar way blended with the piping cries of the newspaper vendors. As he entered the stately gloom with gowned shadows passing in the mist and the porter's bowler hat bobbing in front of him, he felt that he somehow recognized every sensation, the wholesome reek of damp turf, the ancient sonority of stone slabs under heel, the blurred outlines of dark walls overhead--everything. That special feeling of elation probably endured for quite a long time, but there was something else intermingled with it, and later on predominant. In spite of himself he realized with perhaps a kind of helpless amazement (for he had expected more from England than she could do for him) that no matter how wisely and sweetly his new surroundings played up to his old dreams, he himself, or rather still the most precious part of himself, would remain as hopelessly alone as it had always been.

Well, that is very Nabokovian, because it's the first page of Chapter Five of The Real Life of Sebastian Knight, with any direct references to Sebastian removed. Page chosen at random, from the first volume of Nabokov I could put my hand on. I don't think I've made much progress solving the puzzle of why Latecomers seems so Nabokovian. I will continue to gnaw at this problem.

Green Man, for the amusement of Marly Youmans 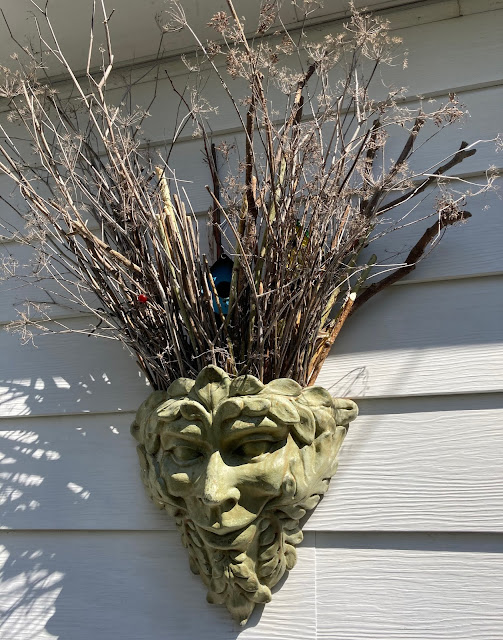 I post this photo of our green man planter, coiffed and bedizened by Mighty Reader this afternoon, because he has long reminded me of the works of Clive Hicks-Jenkins, illustrator of many books by Marly Youmans, one of my favorite living authors. Were I Marly, I would write an ekphrastic poem about Mr Green and his hair-with-birdhouses-and-fennel-and-baubles, but I am no poet and so merely post the photo. You can't tell because there's nothing in the picture to give it scale, but the whole installation is about four feet tall.

Be kind, for everyone you meet is fighting a great battle.

Metamorphoses by Ovid
The Sea by John Banville