Soon will be asleep

I've been reading D.H. Lawrence's poetry collection Birds, Beasts and Flowers. It's less like a book of poems than it is like the unedited contents of a poet's notebook: loose, rambling, unfocused, probably too long. I get the sense that Lawrence is talking to himself here, streaming his consciousness onto the page, letting great and trivial thoughts spin him whichever direction they will, while the poet shows very little interest in structure or consistency of idea. It's all quite casual; one is tempted to call it sloppy, in fact.

If this isn't necessarily Lawrence at his best, it might be Lawrence at his most honest nakedness (and for whom is that their best, eh?). Male sexuality is the forward-moving energy of the universe, we learn, while women are fruitful and multiply but are not so interested in the forward-moving of the males through history. Every thing, bird beast or flower, is primarily a sexual organ abetted by a body of some kind, and to be a sexual organ is, for Lawrence, to say, "Here I am, I'm here." And there is little else going on in the universe. Beauty? A side-effect of the beingness of sex. And sex itself is a misplacement/displacement of the primal male energy of violence, of making war. What is the primal female energy? Lawrence is sure he doesn't know, but he's certain that he can't trust it.

Fascinating stuff, from that perspective. It makes me want to write a novel about a character who writes this poetry, this not brilliant poetry. Had Lawrence been Nabokov, that's just what this book would be.

Here's a bit from "The He-Goat," where Lawrence has a buck attempting union with a ewe, who keeps her true self distant and invisible:

With a needle of long red flint he stabs in the dark
At the living rock he is up against;
While she with her goaty mouth stands smiling the while as
he strikes, since sure
He will never quite strike home, on the target-quick, for her
quick
Is just beyond range of the arrow he shoots
From his leap at the zenith in her, so it falls just short of the
mark, far enough.
It is over before it is finished.
She, smiling with goaty munch-mouth, Mona Lisa, arranges
it so.

My favorite poems in the book might be the ones about turtles. Thanks awfully to Tom Amateur Reader for pointing this book out to me a month or two back. Well worth reading.
at May 14, 2018 2 comments: Links to this post
Email ThisBlogThis!Share to TwitterShare to FacebookShare to Pinterest
Labels: lawrence, poetry, reading 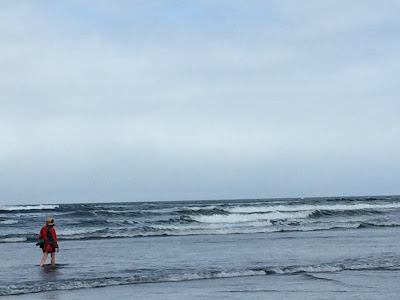 I'm very pleased to tell you that my pal Layne Maheu has a new book coming out! See here. I saw (and envied) long swaths of the manuscript of Man of the World during the years Layne was writing it, and I cannot wait to read the finished novel.

Layne and I met about a decade ago, when he and I shared a literary agent. For a while we got together fairly regularly to drink beer, eat nachos, critique each other's works-in-progress, and bitch about publishing. Layne is a beautiful writer and a nice guy, and it's too bad he lives all the way over in Ballard, a hard place for me to get to from my neighborhood.

I confess myself amused to realize that Layne's new novel is about flight and flying over water. His first novel, the excellent Song of the Crow, focuses on birds and flying over water. I've needed about ten years to notice this. The next time I see Layne, I'm going to suggest he get a pilot's license. I think he really wants to fly.
at May 02, 2018 4 comments: Links to this post
Email ThisBlogThis!Share to TwitterShare to FacebookShare to Pinterest
Labels: layne maheu
Newer Posts Older Posts Home
Subscribe to: Posts (Atom)

If you can't play fingered octaves in tune, you really shouldn't be playing Brahms.

Lexicon of Musical Invective by Nicolas Slonimsky
The Art of String Quartet Playing by M.D. Norton
The Hapsburg Monarchy 1618-1815 by Charles Ingrao
Before Lunch by Angela Thirkell