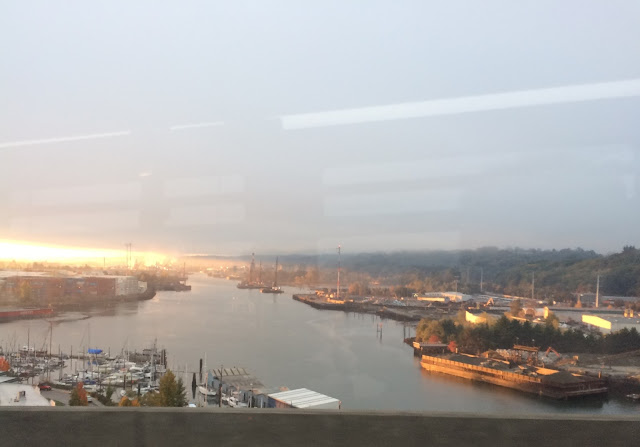 Duwamish waterway, 7:45 AM, as viewed from freeway

Cold this morning, cold enough to see one's breath. Humid as well, the damp working its way into my clothes on my walk to the bus stop. Soon I'll be wearing a winter coat in the mornings and carrying it in the evenings as the weather goes through the usual indecisiveness of autumn as it makes way for the rainy Seattle winter. The world transformed, the grape vine turning yellow and brown, the oak-leaf hydrangea rusting, the magnolia dropping stiff brown leaves all over the garden even as the new blooms are budding out at the tips of branches, a simultaneous play of death and rebirth in our back yard. Miraculous, really. We planted something like 200 bulbs on Sunday afternoon, mostly tulips but some daffodils, in the hope that we'll be around to see them next spring. Fingers crossed.
at October 16, 2017 2 comments:
Email ThisBlogThis!Share to TwitterShare to FacebookShare to Pinterest

a vibrant hash of sex, violence, foul language and blood

Certainly I'm willing to engage with myths, fantasy, folklore, and even science fiction. Certainly I'm willing to give a storyteller time to gather threads and ideas together, to take a couple of deep breaths, clear her throat, set some scenes, take a slow road to wherever she's going. But I am not a man of infinite patience, either, which is likely a personal shortcoming I should overcome. Still, I have my limits.

I wonder if those limits are going to be tested by the television adaptation of Neil Gaiman's American Gods. I admit right off that it's a novel I was unable to finish; I abandoned it around a hundred pages in, making it one of only two novels I've abandoned in the last twenty years (or even longer, maybe). The other novel, in case you wonder, is Jonathan Franzen's Freedom. I like what Gaiman does with ideas of the superimposition of the supernatural with the natural, and he has some attractive cliches involving sympathetic underdogs that he leans on quite often, but I think Mr Gaiman's prose rather stinks, so I can't read him. I've been willing to watch adaptations of his work, because I expect far less from television and the cinema than I expect from a novel. I'm a prig that way. I'm not ashamed of it.

Despite my low standards for televised fare, I worry. Mighty Reader and I have only watched the first episode of American Gods and so far, I must say that the show has attempted to substitute spectacle for storytelling. It's been a vibrant hash of sex, violence, foul language and blood (no human body contains as much blood as goes spurting out in this show). The makers of this version of American Gods seem to be trying too hard to catch our attention by shifting the rules of reality every two minutes and shocking us with violence. The problem is, of course, that so much violence really just benumbs the viewer, and questions about why all of the violence are not asked. Shadow Moon, the protagonist, never asks why the five faceless robot guys are beating the crap out of him. Shadow Moon, the protagonist, has so far been a confused puppet who seems alternately bored and cranky, but essentially unreactive to his own life as it happens. Maybe that's deliberate, although my intuition tells me that his character is simply being ignored by the producers while they focus on displaying high-contrast violence and sex to the viewer. Sort of trapping the viewer into both the ugliness of the real world and the ugliness of a Game of Thrones world at the same time. All, so far, to no real purpose.

But we'll keep watching, with the hopes that something will happen in the way of story and character. Gaiman has a sort of Dickens-in-miniature way with character, if he's allowed. If the makers of the show can get beyond the idea of a circus of set-pieces, American Gods might be worth watching. We'll see.

Meanwhile, I am working on the storytelling in one of my own novels, Go Home, Miss America, as I prepare it for submission to a scrappy little publisher in a couple of weeks. I am thinking of ways to bring the inner life of one main character more to the fore in the second half of the book. It's enjoyable work, this storytelling stuff. Far more enjoyable than the month-plus I recently spent hammering the prose around.
at October 13, 2017 5 comments:
Email ThisBlogThis!Share to TwitterShare to FacebookShare to Pinterest

on the loneliness of the private detective

We've been watching the David Suchet "Poirot" series lately, and have just finished up the final six seasons. Who believes the plot in "Curtain," anyway? Nobody, that's who. But who can blame Christie for killing off the character and making him a murderer in the process, so that for practical purposes he's best off dead? Well done, Agatha.

I am not writing about Agatha Christie's "Curtain," however. I'm writing because it occurred to me last night, during "Elephants Can Remember," that I have a particular way of reading detective fiction. I've said before (because it's true) that I don't look at a mystery novel as a puzzle to be solved. I don't care whodunit, and if you look critically at Golden-age mysteries, the narratives are not logical chains leading from the committal of the crime to the solution. No, they are not, and the discussion of the arbitrariness of the mystery plot's resolution has been going on for at least a century by now. I don't even pay attention to the clues, I'll have you know, because I don't care a fig about that.

As we sat discussing "Elephants" before making tea, I told Mighty Reader that I read/watch detective fiction as a story that happens to the detective character. What do I think when I read a Poirot novel? "Oh, Poirot is interested. Oh, now Poirot is angry because he's been lied to. Now Poirot is feeling triumphant. Now he's kicking himself, poor Poirot." I never think, "Oh, it's the lady of the house, because she's secretly the mother of the neighbors' chambermaid" or whatever. Because I don't care about the mystery.

Frankly, I don't think most readers of mysteries (Golden-age mysteries, that is) care about the crime and the solution. If they did, they'd be awfully frustrated. See above denial of logical chain in mystery novels. I think most readers care about the observations regarding society, and about the personality of the detective. We want to see the detective at work in the world, and we don't so much care about what he's doing, so much as we care about how he responds to the world, to the actions of evil and good, of guilt and innocence. The mystery is just a bit of sweet fluff we pretend to be solving along with the detective (who always has knowledge that is withheld from the reader, because if the reader actually does get all of the clues, he solves the crime a hundred pages before the detective solves it because, as is also well-documented, the brilliance of the detective is a weak fiction that the writer and the reader contract into in order to get on with the story about the detective; it's not something that's actually borne out by the detective character on the page).

Where am I going with this? Nowhere, really, except that I continue to be fascinated by my own attraction to detective fiction, despite its flaws and essential intellectual dishonesty. Do writers of detective fiction actually convince themselves that the mystery puzzle is a) interesting, and b) solved through the collection of clues performed by the detective? I hope not, because that's a pretty large delusion. The flip side of this, however, is that all of the detective fiction I've read that abandons the silly conventions of mystery-as-puzzle, are failures as novels. I'm looking very hard at Paul Auster, but he's not the only culprit. The detective outside of the machinery of detective action is a non-entity. That might be an interesting subject for a novel, perhaps one that's actually been successfully written. I don't know what that novel is, though. Most of the contemporary metafictional detective stories I've read have been pretty frustrating (which is to say boring). I recall that Borges made something interesting, though I can't recall it in any detail.

If you can't play fingered octaves in tune, you really shouldn't be playing Brahms.

Lexicon of Musical Invective by Nicolas Slonimsky
The Art of String Quartet Playing by M.D. Norton
The Hapsburg Monarchy 1618-1815 by Charles Ingrao
Before Lunch by Angela Thirkell